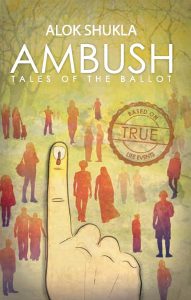 AMBUSH Tales of the Ballot

AMBUSH Tales of the Ballot

A book every Indian who values their freedom should read with pride. This riveting collection of short stories is based on true life incidents. The canvas is the incredible phenomenon that is Indian electoral politics. The success of electoral democracy in a poor, underdeveloped nation which laboured for centuries under foreign rule is nothing less than a miracle.

But seventy years after independence, the teeming millions of India take freedom for granted. The electoral process is as much a part of our lives as inhaling and exhaling. Few know of the enormous challenges the Election Commission faces in conducting free and fair elections even though the Constitution of India guarantees complete autonomy to the Election Commission, so much so that once the electoral process begins, not even the judiciary can interfere with it.

This book takes us behind the scenes, giving us glimpses into the extraordinary challenges faced and overcome by the unsung crew of the Indian electoral story. These are tales of ordinary people – polling staff, security personnel, candidates, journalists, police, and above all, the Indian voter, who have demonstrated extraordinary courage and an inspiring sense of duty in conducting the most complex and difficult elections in the world.