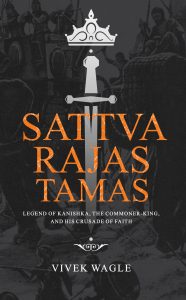 Sattva Rajas Tamas : Legend of Kanishka, the commoner-king and his crusade of faith

Sattva Rajas Tamas : Legend of Kanishka, the commoner-king and his crusade of faith

Circa 800 BC: Merit or birth? Meritocracy or dynastic monarchy? King Sarthak of the mighty kingdom of Manukeshwar faces this great dilemma in naming his successor. The contenders to the throne are the upright and virtuous Kanishka, son of a learned Rishi, and his own firstborn, the selfish and arrogant Prince Jaivant. Breaking centuries of oppressive tradition, the King names the valorous commoner as heir. Humiliated and aggrieved, Jaivant bides his time. Using age-old deceit and treachery, he succeeds in usurping the throne. But he does not anticipate the resolve of the ascetic warrior. The stage is set for a mighty struggle. Through an interlinked web of events and emotion, through love, envy, deceit and romance, the book tells the story of a crusade to restore dharma in a kingdom afflicted by despotic dynastic rule. Sattva Rajas Tamas is the story of powerful opposing forces. It is also the tale of a man’s remarkable resolve to keep fighting for truth and justice, to never give up. The ancient tale has disconcerting parallels in our modern times. Though the times have changed, the conflict between dharma and adharma has not.