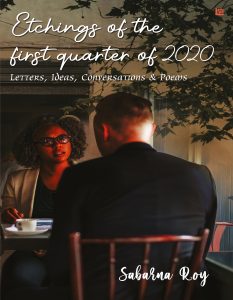 Etchings of the First Quarter of 2020

Etchings of the First Quarter of 2020

To readers of Sabarna Roy’s Random Subterranean Mosiac: 2012 – 2018, his latest slim and elegant volume titled Etchings of the First Quarter of 2020: Letters, Ideas, Conversations and Poems comes as another delightful read. In this two-part volume, packaged with a selection of his poems, Roy explores the concepts of duality and constancy in discussions with his daughter. Presented as conversations over coffee and desserts, the talks extend to diverse topics with Lolita at one end and marine conservation at the other. In his poems, Roy and his alter-ego, Sandy, soothe and shock you in turns until you burst out of the last page, breathless and asking for more.


Sabarna Roy’s characters are all around us. He has dabbled in poetry, prose, plays and non-fiction with equal elan and delved into the emptiness and futility of life reminding us of the masters in the trade.
Two quotations from Sabarna Roy’s works will prove the above stated point:
“A question leapt into his mind: Is it possible to achieve true happiness by living a solitary life or is it important to lead a community life where one instinctively believes that one’s own desires are insignificant compared to the desires of others and one works towards fulfillment of their desires as if they are one’s own?”
“Many questions crossed his mind. Did he secretly crave to believe in god? Was he looking for a god to deflect his loneliness or was his loneliness actually a sense of pride, which was an obstruction between him and his god?”