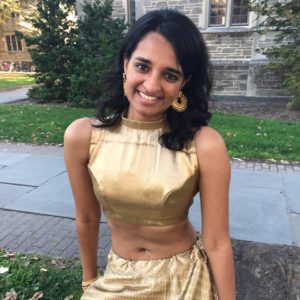 I applied to my college [Princeton University, USA] by mistake and chose it because of a photograph of pumpkins on its website. My first pay-check came from my first piece of commercially published writing that was published as a caption on a t-shirt [I used to design clothes]. I always have a post-it and pen under my pillow, in case I dream of new plot lines or scenes.

Living in a socially isolated world

During high school, I gave several presentations in schools across Tamil Nadu encouraging study of “endangered languages” and the arts. Thousands of students pledged to conserve their native tongues. Since then, I’ve received various letters from students who became less afraid to pursue their passions in the arts and humanities – they don’t feel as compelled to become doctors or engineers anymore. And a lot of the languages of the area are less endangered!

Bringing back medals from USA Archery Nationals and giving them to my family in India.

“Life stands here proudly” or “Did it for the story”.

My latest novel actually deals with this question by bringing together several countries in different time epochs. There’s Ibinia based on Ancient Greece and contemporary Spain. Senechelles based on Seychelles of the late 1990s to early 2000s and Senegal of today. Couture based on Paris of the 1920s, Milan of the 1970s, and New York of today. And Aidni, based on Ancient India and Victorian England. So probably one of those places.

Whenever I have an idea, wherever I find space the soonest. I do have a writing corner in my bedroom at home; but from boarding school to college to work in the United States, I’m essentially never home.

All characters speak differently with their own stock phrases, so I don’t think I have a consistently used phrase. But I do tend to describe a lot of reactions by focusing on characters’ eyes.

If I have to write an intensely sad or romantic scene, I induce extreme amounts of those feelings before I write the scenes.

Shriya Sekhsaria, born in Mumbai, India, penned ONE when she was just 15 years old. She has won a myriad of awards at various levels, including a National Writing Competition, and has studied literature online with Stanford and Harvard University. ONE, for Shriya, is a culmination of 7 years' worth of imagination and passion, the publishing of which has been a dream come true. To find out more about her books visit www.shriyasekhsaria.com.