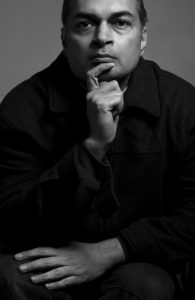 I love bodybuilding. I like to tinker with my car and drive it fast. I am a tree hugger (contradictory-but it’s true)

My greatest fear is of being buried alive.

My greatest achievement so far, is writing ‘The Disobedient Darkness’.

Believing in the journey of ‘The Disobedient Darkness’, even when it was just a vague concept.

None! I don’t believe in the concept of a low point.

I admire James Cameron for the expanse of his imagination and the wide variety of work that he has done.

Captain Hector Barbosa from the ‘Pirates of Caribbean’.

I love to reread ‘The Prophet’ by Kahlil Gibran.

My five favourite movies would be: Lord of the rings series. The Matrix series. Pirates of the Caribbean series. The Pink Panther series. The Witness.

I would love to have a photographic memory and an ability to solve complex mathematical problems.

For my childhood, I would love to live as a growing boy in Britain during the World War II. It was a dangerous and romantic time. Or in India in 1942, dreamy eyed, shouting ‘Quit India’ for Gandhiji. As an adolescent, I would be living in the 1960s and 1970s of America, dreaming of free love, dancing in Woodstock and swaying to the infinity of ‘The Doors’. As an adult, I would find myself in Paris of the 1870s, drinking wine and abs in the with Van Gogh, Gaugin, Toulouse Lautrec and Manet at Montmartre. It was the time of heartbreaks, arguments, inspiration and discovery. I love it. The Silver years I would love to spend (in any millennia) either in Ireland or New Zealand; in a cottage overlooking the sea, with my family and pets, writing, reading and drinking beer.

I would love to play the guitar like Jimmy Page of the ‘Led Zeppelin’.

None. I wish to write my own books and the better ones are on the way.

I like to write the first thing in the morning, then for a couple of hours after 4 p.m. I have my little ‘office space’ which has two computers. I use one to write and the other is for research and making pictures (I am a photographer too - remember) when I get stuck.

Comics. Used to be Tintin, but now I have graduated to Batman.

Trust your journey and be willing to learn on the way.

Prateek Dubey is a photographer, writer and an artist based in New Delhi, India. His work has featured in the Guardian U.K, the Deccan Chronicle, The Hindu and N-Photo magazine besides various photography sites around the world. Writing has been his favourite form of expression for a long time. He has written many pieces of entertaining short fiction using whisky, Black Sabbath, beautiful aliens and other unconventional elements as his motifs. He blogs (Prateek’s World), merging photography with storytelling, on his experiences of life in India. Some of these photo essays have been featured in the Pioneer and Mail Today. He has also had a solo show of oil paintings at the Lalit Kala Academy in 2005 besides participating in various group shows of painting and photography. Prateek is a graduate of chemistry from the Delhi University and also a trained fashion designer from India’s premiere fashion institute, the National Institute of Fashion Technology.