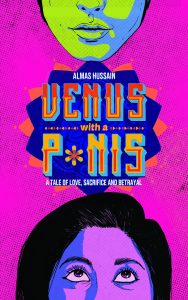 Venus with a P*nis – A Tale of Love, Sacrifice and Betrayal

Venus with a P*nis – A Tale of Love, Sacrifice and Betrayal

Meet Rajan, the irresponsible younger son in a family of doctors. He’s reckless. He’s rebellious. And he’s dressing up like a woman these days.

No. He’s not a cross-dresser. Nor is he transgender. He thinks he’s a murderer. It all begins with a mother-to-be dying on the young gynaecologist’s watch. And to atone for her death, he banishes himself to the boondocks.

He arrives at the remote village of Kaatgram, where pregnant women have been dying left, right and centre. But the Kaatgrami men are not about to send their women to a male gynaecologist. So Rajan does the next best thing—he disguises himself as a lady doctor.

Rajan feels it is okay to deceive the people about his gender, so long as he gets to save their lives. Damini, the local MLA’s daughter, supports him in his dream of setting up a maternity clinic in their village. Rajan falls for her. But she doesn’t even know he’s a man.

Will Rajan manage to woo his sweetheart and marry her? Or will the villagers tear him to pieces when they find out that their lady doctor is actually a man?