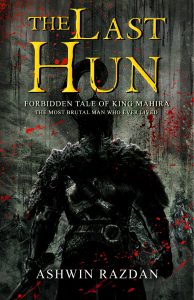 The Last Hun – Forbidden Tale Of King Mahira: The Most Brutal Man Who Ever Lived

The Last Hun – Forbidden Tale Of King Mahira: The Most Brutal Man Who Ever Lived

Hun, the universal appellation for terror, was earned with brutality and blood. Legend has it that Mahira, a Hun dynasty King of the early 6th century, was the most cruel man of all time. Sagala, the capital of his vast but dying empire, that extended from the Central Steppes, over the Hindu Kush, into what is modern-day Pakistan and north-western India, to the borders of the Gupta Empire, was a place where unrivalled beauty and extreme bestiality existed in uneasy alliance.

Like his predecessors, Mahira too, had visions that made him both feared as well as invincible. Obsessed with the desire to rule the world, he set off into the grasslands of Central Asia, on a journey to unite every kingdom known to man, under his savage rule. But the Gods scoffed at his hubris and visited him with nightmarish visions and excruciating pain. A prisoner of intense suffering, Mahira grew ever more erratic, ever more brutal. His heinous murder of the King of Lanka, lives on in folklore to this day. On taking the kingdom of Kashmir, he ordered the massacre of the entire Buddhist population. On a whim, he slaughtered a hundred of his own elephants.

But, as this victim of malady escapes execution, hatred, betrayal, conflict and war, all he truly desires is the love of his Queen.

Centuries have passed since King Mahira lived and ruled, but his infamy and deeds live on in legend and folklore. And echoes of his aggression, quest for power, world domination and subjugation of people, resound 1400 years later, with dangerous portent, in a world given increasingly to violence and terror.