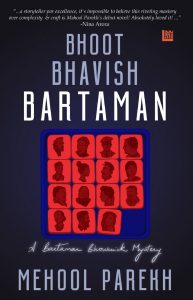 A beautiful woman is found brutally murdered in her bed. The usual suspects are arrested by the Police until an odd-ball amateur sleuth starts to investigate. Something about the murder does not sit right with him. To start with, the victim – Rupali, a regular housewife living in marital bliss. But is that the truth? Why would someone murder her and why did she meet such a gruesome end? Who, in reality, was she?

Introducing Major Bartaman Bhowmick, Southern Command of the Indian Army. Peace-time army life and supportive seniors allow Major Bhowmick to indulge in his hobby and passion – crime detection. His sharp investigative talents are highly valued by his cousin, an ACP in Pune. Robin Chowdhury is a city crime reporter, whose combination of keen intellect, attractive looks and affinity for all things tech, makes her a great sidekick for the Major.

This book is as much about Rupali’s astounding story as her murder and Major Bhowmick and Robin’s investigation into the murder with its surprising conclusion.